A Look Around the World — Cultural Celebrations

When educating the minds of our youth

we must not forget to educate their hearts.

Talking about similarities and differences represented in the classroom, brings the topic to a more personal level and helps to build strong, inclusive communities where everyone feels valued. Helping children understand differences encourages them to feel good about who they are and where they fit in the world, and appreciate diversity in others. As highlighted by the National Association for the Education of Young Children (NAEYC), “To form positive self-concepts, children must honor and respect their own families and cultures and have others honor and respect these key facets of their identities too.” The goal for very young children (under age 5) is that they feel cared about and develop a sense of belonging to their family and classroom groups.

Each child’s and teacher’s family traditions should be represented; holidays studied or presented should be connected to specific children/families in the group. According to the Department of Education and Early Childhood, “Acknowledging and celebrating cultural diversity is paramount in the classroom as it can dispel prejudicial views and even prevent them from forming.” The emphasis should be on learning about one another’s families, not celebrating others’ holidays. Learning how we are all the same and different can lead to acceptance and tolerance. This ongoing discovery helps unite and educate us. We have the unique opportunity to expose children’s minds and hearts to cultural experiences at a young age when these ideas are being formed.

One way to nurture respect and open-mindedness for other cultures is to learn more about them. When children are in a safe and familiar environment, learning about differences can be fun and informative. Exploring different foods through tastings, various games and activities through play, different customs through arts and crafts, and traditions through story are just a few ways to expose children to different aspects of different cultures. PBS recently published a list of children’s books that teach children about cultural awareness and diversity. You can access this list on their website.

Decisions about what holidays to celebrate in classrooms are best made together by teachers, parents, and children. The world is immense, and there are nearly endless customs and cultures to explore. We have highlighted (listed chronologically) four diverse cultural celebrations below, and in the attached infographic, for inspiration. 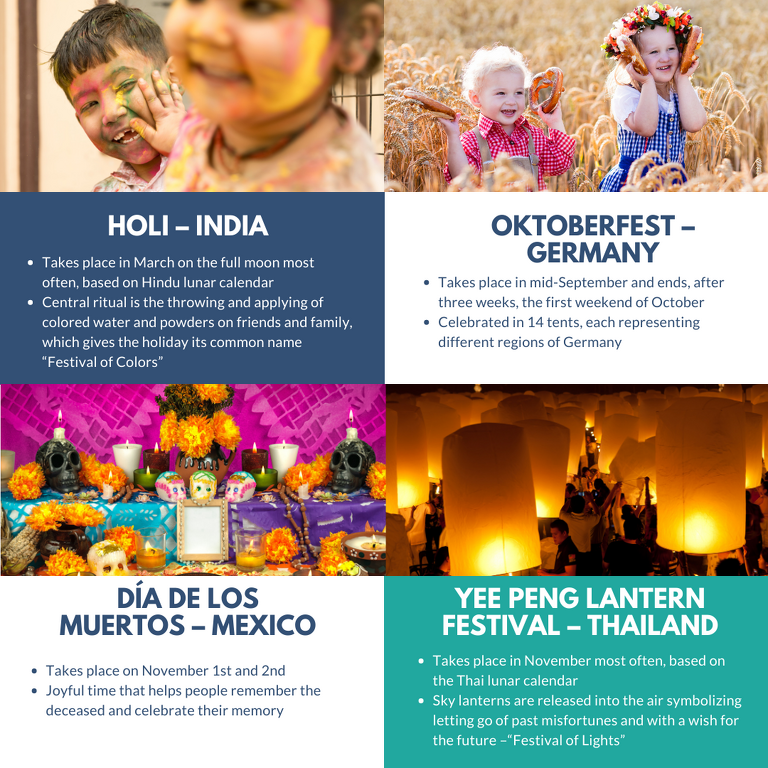 The date of Holi is based on the Hindu lunar calendar and is different every year. Most often, Holi is celebrated at the end of winter, around the full moon in March. The celebration’s first evening is called “Choti Holi” or “Holika Dahan,” and begins on the night of the full moon (Holi eve) with bonfires to rid evil spirits. The next day is the time for Holi (Rangwali Holi) celebration. The festival is one of the most celebrated events in India.

The central ritual of Holi is the throwing and applying of colored water and powders on friends and family, which gives the celebration its common name, “festival of colors.” Men, women, and children carry brightly colored powders and liquid colors to throw and smear on the clothes and faces of neighbors and relatives. Dry powder colors are called “gulal” and colors mixed with water are called “rang.” Each vibrant color has significance, and there is a color for nearly every occasion, moment, and celebration.

Holi is a day to celebrate and let go — loud music, favorite foods, and fun-filled excitement are all important components of the celebrations.

Oktoberfest [ok-toh-ber-fest] is one of the world’s largest festivals and attracts millions of visitors from all around the world to Munich, Germany each year. Oktoberfest begins in mid-September and ends after three weeks on the first weekend of October. Typically, many people think of beers and tents when they hear about this cultural celebration, but there is much more history and tradition to it.

On October 12, 1810, the future King Ludwig I married Princess Therese. The people of Munich were invited to celebrate the wedding in front of the city gates on the fields. In honor of the Princess, the fields have been known as Theresienwiese (“Theresa’s fields,” Wies’n for short) ever since, and each year Oktoberfest commemorates this wedding anniversary.

Light blue and white are prominent colors at Oktoberfest, as these are the colors of Bavaria, the southeastern region of Germany, where Munich and Oktoberfest are located. Through the years, a variety of other color schemes have also been incorporated into the tents’ decorations in recognition of other German regions and states.

Oktoberfest is celebrated on the Wies’n in 14 tents assembled on the grounds, each representing different regions of Germany with different foods and themes. Each tent serves traditional Bavarian dishes, ranging from roasted ox to roasted chicken, pork knuckles, sausages, cheese platters, and all tents offer giant pretzels. Giant pretzels are a staple at Oktoberfest celebrations!

Yee Peng (or sometimes also written as Yi Peng) is a festival unique to northern Thailand, celebrated on the full moon of the 12thmonth of the Thai lunar calendar, which is usually in November. Although other towns and cities in northern Thailand celebrate Yee Peng, Chiang Mai is the heart of this magical festival.

Beautiful paper lanterns, called “khom loi” or “khom fai,” are simultaneously released into the evening air symbolizing the act of letting go of past mistakes and misfortunes from the previous year. Many also believe that if you make a wish when you set off the lantern, it will come true. The history of Yee Peng is rooted in Buddhism and is believed to have been inspired by the legend of the candle-carrying bird that visited Buddha to speak about merit.

Khom loi are made from thin material such as rice paper. A candle or fire starter is attached and generates hot air that is trapped inside the lantern, which lifts it.  As the lantern rises, the fire produces energy that moves the lantern in different directions as it flies into the sky.

Each participant releases their sky lantern into the air at approximately the same time in the evening after music, other celebratory entertainment, or prayer. Just imagine thousands of lanterns lifting simultaneously, at various speeds, introducing various levels of brightness into the dark night.

Mexico’s Día de los Muertos (Day of the Dead), [Spanish dee-ahthe laws mwer-taws] is one of the country’s most popular festivals. This two-day festival officially starts at midnight on October 31st and takes place every November 1st and 2nd. This cultural celebration is a joyful time that helps people remember the deceased and celebrate their memory. Although most strongly identified with Mexico, Día de los Muertos is celebrated throughout Latin America and everywhere with a Latino population, including Los Angeles, California.

Each state has its own customs and traditions but the common theme is one of honor and remembrance for those who have died. Many families begin planning and preparing for weeks leading up to this colorful celebration, and many create altars in their homes.  In most regions, November 1st is to honor children and infants, and November 2nd is to remember deceased adults. Over the course of the festival, families will visit cemeteries to decorate relatives’ graves and celebrate their lives.

Mexico is filled with color and fiestas during Día de los Muertos. Bright orange Mexican Marigolds are everywhere, along with colorful Catrinas (artistic skeleton figurines made of ceramic, clay, and other materials), sugar skulls iced in blues and pinks and yellows, and very detailed tissue paper cutouts (papel picado) hang in windows.

Diane Boewe, M.S.Ed., is Director of eLearning and Technology for the McCormick Center for Early Childhood Leadership at National Louis University.