Early educational interventions, such as Head Start, have been widely recognized as an effective way to mitigate the negative effects of poverty on early learning and development (Camilli, Vargas, Ryan, & Barnett, 2010). In the past decade, there has been a strong expansion of early childhood programming, including Head Start and state-funded prekindergarten programs. However, the cost of the programs calls into question the extent to which this expansion can be maintained. A tension exists between serving as many children as possible and providing the most impact with limited economic resources (e.g., Barnett & Hustedt, 2011; Steuerle, Reynolds, & Carasso, 2007), making the study of program design such as length and intensity of programming critical to efforts to serve low-income or at-risk children in the most efficient fashion.

The field knows little about the specific program design factors that lead to favorable program outcomes (Reynolds, 2004), and very few studies have addressed this issue. Therefore, we reviewed two frequently cited studies that looked at Head Start programs, the nation’s largest early educational intervention, and examined the impact of one program factor, intervention dosage, on children’s school readiness outcomes. In the two studies, program dosage was defined as the amount of services children received, and was measured as the duration of program enrollment (i.e., one year versus two years) and the intensity of the program (i.e., half day versus full day).

Method. Using a nationally representative sample of Head Start children, Wen and her colleagues (Wen, Leow, Hahs-Vaugh, Korfmacher, & Marcus, 2012) examined school readiness outcome differences by the end of kindergarten between children who attended Head Start program for two years and those who attended for one year. This research question sounds simple, but is hard to address. It is challenging to make a causal conclusion regarding whether children and families who experience a longer duration of intervention would perform better on measured program outcomes than those who are enrolled for a relatively shorter time, because participants who experienced different amount of intervention may differ in other ways as well, including their demographic characteristics (Hill, Brooks-Gunn, & Waldfogel, 2003; Powell, 2005). Simply stratifying participants by intervention duration or estimating the impact of duration in a standard regression model will not typically yield unbiased estimates because sample selection bias might be operating. Therefore, the researchers adopted a rigorous statistical methodology, propensity score analysis, to match Head Start one-year versus two-year program children on 28 family background variables, so that the impact of demographic differences on child outcomes can be largely controlled for, and therefore, the researchers can draw a precise conclusion on how different program duration would lead to different outcomes. This methodology is innovative in addressing the causal relationship when the research design of randomizing children into programs of different durations is almost impossible.

Results. Before children with different lengths of program attendance were matched on their baseline characteristics, the outcome comparison yielded significant differences on only two Woodcock-Johnson subtests (literacy skill and math reasoning), favoring the two-year program children (see statistics in Table 1). However, after children were matched on their demographic characteristics, the researchers found that among the five matched comparison groups, children in two-year Head Start performed significantly better than those who attended the program only for one year on all six outcome measures, with decent effect sizes (Table 2). The findings convey a strong and clear conclusion that more, rather than fewer years of Head Start would accrue greater program outcomes.

In a different research study, Leow & Wen (2016) examined another Head Start dosage variable, the program intensity (i.e., half-day versus full-day), and its impact on child outcomes. Similarly, the study involved a Head Start national sample and adopted the same methodology, propensity score analysis, to match children in full-day and half-day programs on various demographic backgrounds before comparing the effects of program intensity. The method would allow the researchers to draw precise causal conclusions on how program intensity predicts child outcomes by controlling for other potential factors. In reality, it is almost impossible to randomly assign children to programs with different dosage intensity to test the effects because it is unethical to deny services to eligible children, especially for public service programs. The advanced methodology of the study helped to address a critical question that has significant policy implications.

Method. The sample included 2,097 children who were newly enrolled in Head Start in the fall of 2006. They were from 135 Head Start centers and 410 classrooms, of which 61% were three-year olds and the rest were four-year olds. The three-year old children were eligible to stay in the program for two years, while the four-year olds were enrolled for one year before they transitioned into kindergarten. About 51% of children were enrolled in the half-day program.

Results. The analyses were performed separately with two different age cohorts – the three-year olds who stayed in the program for two years and four-year olds who stayed in the program for one year. The results showed that in comparison to a demographically comparable group of children who attended the Head Start half-day program, children who experienced more intensive full-day intervention services showed no significant differences on any of the five academic and social outcome measures, and this was true whether children attended the program for one year or two years (Table 3).

Discussion. Given limited resources, how should we design the most optimal Head Start and state-funded early childhood education programs that would maximize their impact on children’s school readiness? There is a recent national push to expand state-funded prekindergarten programs to enhance school-related academic skills and social-behavioral competence (Howes et al., 2008). Statistics show that these state-funded programs mainly recruit four-year old children who would be eligible to stay in the programs for only one year before transitioning into kindergarten (Barnett, Hustedt, Robin, & Schulman, 2005). However, the Head Start one-year and two-year comparison study (Wen et al., 2012) clearly suggests that that public preschool programs should target children as early as possible and keep them in the programs for a longer period of time in order to maximize the educational benefit for these vulnerable children. This study provides strong policy justifications for public funding for early education for a minimum of two years.

However, the finding regarding the association between program intensity and child outcomes is contradictory to our hypothesis, and to some extent, it is surprising. Hypothetically, we would hope that full-day preschool programs offer children more opportunities for child-centered creative activities and free play, as well as more opportunities for socialization with peers. But instead of making the policy recommendation that Head Start should drop the full-day model and offer only the half-day model to serve more children, the authors think the study actually raises the question of how to promote Head Start program quality, so that the full capacity of this public early intervention program can be fulfilled.

Also, instead of answering the question of whether full-day and half-day models make a difference in child outcomes, the study brings up more research questions that need to be addressed. For example, it is unclear how the combination of program intensity and duration would impact program outcomes. Would one-year, full-day programs be similar to two-year, half-day programs? Secondly, program quality needs to be taken into account. Both quality and quantity of Head Start intervention matter in shaping low-income children’s development. Future research should also address the interaction between program quality and quantity and the association with program outcomes. 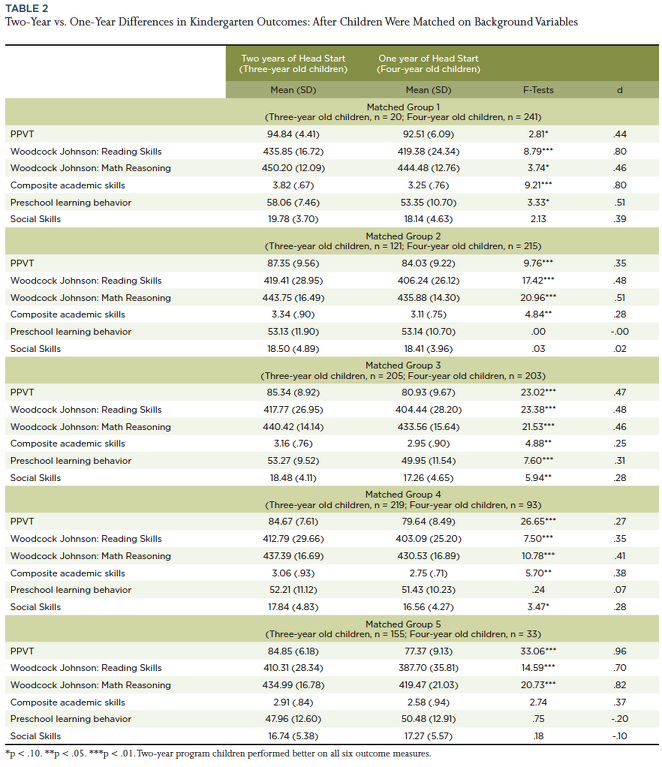 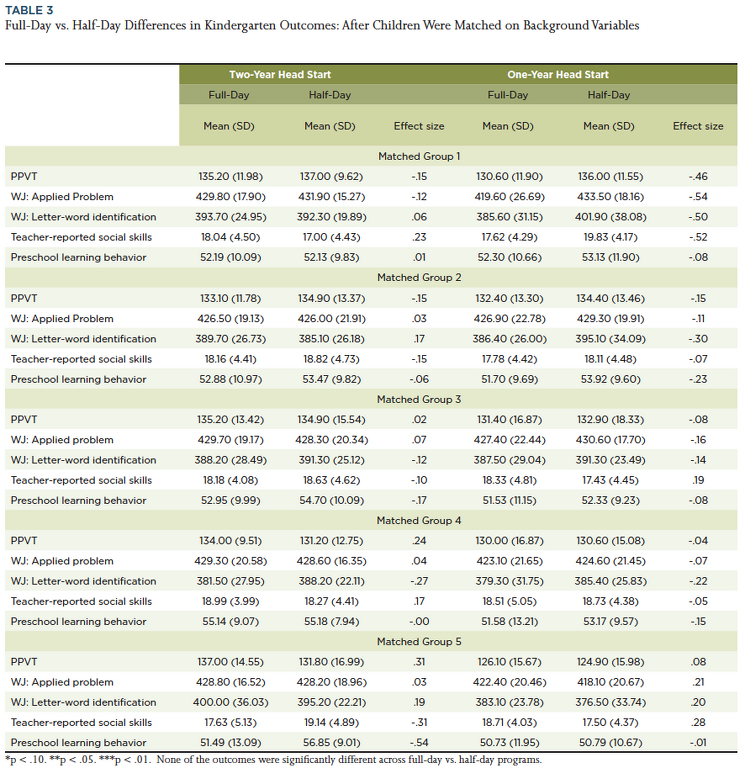 Leow, C., & Wen, X. (2016). Is full day better than half day? A propensity score analysis of the association
between Head Start program intensity and children’s school performance in kindergarten. Early
Education and Development, 28(2), 224-239.