A Look Around the World | Winter Celebrations 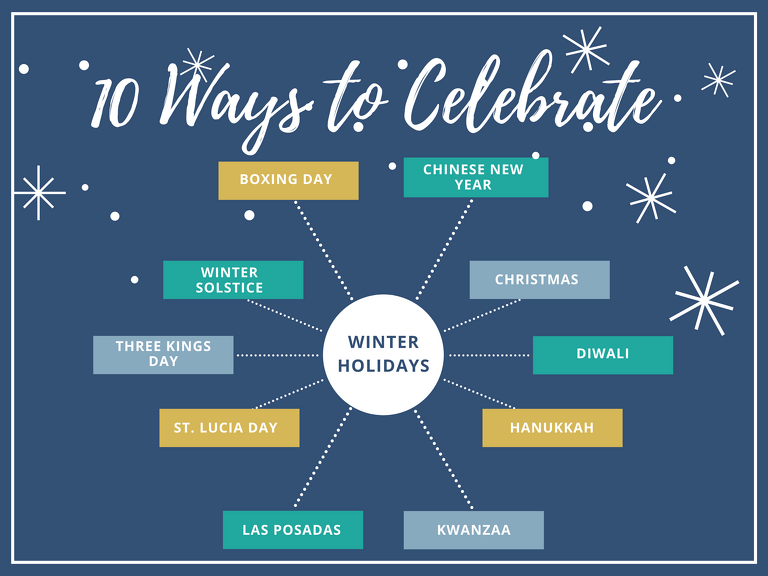 Cultural differences should not separate us from each other,
but rather cultural diversity brings a collective strength
that can benefit all of humanity.

The winter holiday season is a special time of year, especially for children. How we celebrate this year may look different, but the spirit will be the same! As early childhood education professionals, we strive to make this time of year special for the children in our lives and welcome the opportunity to celebrate diversity and promote inclusion.

Regardless of how you say it – celebrate, celebrar, fira, célébrer – a celebration is commonly defined as “an act or event” that “commemorates something” or “makes something special.” Most people take time during the winter months to celebrate the end of the year and the beginning of a new. While there are many differences in the events we celebrate and how we commemorate them, they all have similar aspects of togetherness, reflection, and enjoyment.

With the winter months upon us, we look around the world to explore 10 different winter celebrations. Learning about the celebrations of other cultures can bring us closer together and make us stronger. It is also easier than ever before to explore these curiosities with today’s technology!

There are countless winter celebrations and we have highlighted the following 10. We also created an infographic resource for you to download that shares highlights of these celebrations. Now more than ever, it is important to take time to celebrate. Enjoy!

Typically celebrated on December 26th, Boxing Day became an official holiday in 1871 and is celebrated in the United Kingdom and former British colonies. There are several theories as to why it was named Boxing Day, but the most common is that servants frequently had to work on Christmas day. Therefore, the next day, their employers would give the servants the day off. In addition, employers often “boxed up” gifts and sometimes included leftover food from their holiday meals for the servants to take home and share with their own families. Another popular origin story is that Boxing Day arose from the tradition of people making charitable donations during the Christmas season. People either created charitable boxes to share with the less fortunate or put money into boxes at church for the same purpose. Today, Boxing Day has turned into a time to shop post-holiday sales and watch copious amounts of sports including loads of football (what US folks call soccer) and even the occasional boxing match.

Chinese New Year, also known as the Lunar New Year, is celebrated in accordance with the traditional Chinese calendar, with each new year marked by a different Chinese zodiac animal. This coming year, celebrated on February 12th, 2021, will be the Year of the Ox. Families come together to celebrate, honor one’s ancestors, set off fireworks, and eat traditional Chinese dishes such as dumplings and noodles. It is also traditional for parents to give their children red envelopes that contain small amounts of money. In general, the holiday is celebrated to commemorate a new year of good fortune and happiness. In other countries, Chinese New Year is also associated with festivals such as the Spring Festival and Lantern Festival.

People all over the world celebrate Christmas with both religious and secular traditions and customs. These customs include decorating evergreen trees – or, in India, mango or bamboo trees; sharing meals with family and friends (picnics are prevalent in warm climates); waiting for Santa Claus; and exchanging gifts on Christmas Eve and Christmas morning. The foods eaten during Christmas are just as varied as the ways in which people celebrate, but two common items are candy canes and Christmas cookies.

Diwali is a five-day festival of lights celebrated by millions of Hindus, Sikhs, and Jains across the world. Diwali or Deepavali(Sanskrit), meaning “a series of lights,” is a religious holiday that spans three interrelated but distinct religions: Hinduism, Jainism, and Sikhism. This religious festival celebrates new beginnings and the triumph of good over evil, and light over darkness.

Each religion marks different historical events and stories with a variety of traditions and customs, including many lights and oil lamps that are lit on the streets and in houses. People visit their relatives and have feasts, and fireworks and festivities are an essential part of the occasion. There are many different things that might be eaten during Diwali, but it is most known for the sweets.

Hanukkah is the eight-day Jewish festival of lights that commemorates the reclaiming and rededication of the Second Temple in Jerusalem. Against all odds, a small group reclaimed the Holy Temple and rededicated it to the services of G-d. When they sought to light the Temple’s Menorah, they found only a single batch of oil that had escaped contamination. Miraculously, they lit the menorah and the one-day supply of oil lasted for eight days. To commemorate these miracles, this wintertime “festival of lights” is celebrated with a nightly menorah lighting, special prayers, and fried foods.

Kwanzaa is a seven-day African-American festival, introduced by Dr. Maulana Karenga in 1966, that celebrates community, family, and culture from December 26th to January 1st. There are seven principles and seven primary symbols that emphasize a unique set of values and ideals during the seven days of Kwanzaa.

During Kwanzaa, a special candle holder called a kinara is used. A kinara holds seven candles, three red ones on the left, three green ones on the right, and a black one in the center. A candle is lit each night during Kwanzaa.

The celebration of Las Posadas is an important Christmas tradition in Mexico. These celebrations take place from December 16thto December 24th. The word posada means “shelter.” The nine nights of posadas represent the nine days it took Mary and Joseph to get from Nazareth (where they lived) to Bethlehem (where Jesus was born). The Bible Story of Mary and Joseph’s journey to Bethlehem and their search for a place to stay is reenacted during the celebration. Each night begins with a procession of people holding candles and singing Christmas carols. The procession will make its way to someone’s home (a different home every night). Once outside the home, half of the people sing the role of Joseph asking for shelter and the other half sings the part of the innkeeper saying there is no room. The parts are sung a few times until the innkeeper agrees to let them in. Once inside, the celebration continues with a religious service and ends with food provided by the host. Tamales and atole (traditional Mexican beverage) are customarily served. The celebration usually ends with breaking piñatas.

St. Lucia Day, also called St. Lucy Day, is a festival of lights most widely celebrated in Scandinavia and Italy. St. Lucia is a Christian feast day that commemorates Lucia of Syracuse, an early-4th-century virgin martyr. According to legend, St. Lucy brought food and aid to Christians hiding in the Roman catacombs, wearing a candlelit wreath on her head to light her way and leave her hands free to carry as much food as possible.

Today, throughout Europe, families observe St. Lucia Day in their homes with a variety of customs and traditions. Many celebrate with a processional of children dressed in white, carrying candles. Girls usually wear a white dress with a red sash around the waist and a crown of candles. It is traditional to serve a St. Lucia Crown Cake, usually a round coffee cake with seven candles placed in a circle. Adults traditionally drink glögg, a type of mulled wine, and serve coffee or lingonberry juice. A popular food eaten on St. Lucia day is lussekatts, buns flavored with saffron and raisins that are eaten for breakfast.

Three Kings Day is a celebration of the biblical tale in which the Three Kings (Melchior, Caspar, and Balthasar) visit baby Jesus after his birth. It is celebrated on January 6th which is 12 days after Christmas day. According to the Gospel of Matthew, the three kings traveled to Bethlehem to bring the baby Jesus gifts of gold, frankincense, and myrrh.

Today, people from countries all over the world celebrate this day. In Mexico, children are told to leave their shoes by the door of their house so the three kings can visit and leave them presents. Many bakeries make rosca de reyes which is a sweet bread meant to represent a king’s crown. The bread usually has several baby figures inside. Anyone who gets a piece of rosca with the baby figurine is expected to host a party on Día de la Calendaria which is February 2nd.

The Winter solstice marks the official start to winter. It is the astronomical moment when the Sun reaches the Tropic of Capricorn, and in the Northern Hemisphere, we have our shortest day and longest night (based on hours of sunlight). This year the winter solstice is on December 21st, 2020 at 4:02 a.m. Central Time. The Winter solstice has played an important role in cultures worldwide since ancient times. The Pagan celebration of Winter Solstice (also known as Yule) is one of the oldest winter celebrations in the world.

The winter solstice is traditionally celebrated as a symbol of the changing seasons and of the Earth’s rebirth and is believed to hold a powerful energy for regeneration, renewal, and self-reflection. Traditional winter solstice foods often have an emphasis on the Earth itself – incorporating nuts, berries, spices, squash, potatoes, and hunted game like goose and venison.

During this time of year, we can reflect on our personal celebrations and how others around our communities, our country, and around the world celebrate. Talk with your staff about the 10 celebrations listed here to find out how much they know about these winter celebrations.

Reflect on These Questions